Browser Cookies
This site uses cookies necessary to properly function. By closing this popup, clicking a link or continuing to browse otherwise, you agree to the use of cookies. View our policies.

Our coaches, teachers, and instructors are high energy, welcoming, and supportive! Each member of our team is more than just an expert in their field -- they're also a successful and positive role model who strives to do good in the world.

Program Director
Emilie is an NCCP Level 2 coach with over 15 years experience working in the gymnastics industry. She is a former Provincial gymnast. Her specialty is coaching flawless fundamentals in younger competitive athletes, and inspiring and guiding Optional level athletes towards success. Her attention to detail is unparalleled, and she is known for cultivating high standards among her athletes and coaches, while maintaining a fun and supportive atmosphere. She is responsible for the creation of the proprietary EPIC Level Systems and ensures consistent and quality programming and coaching for our gymnastics programs. Emilie is also a practicing Naturopathic Doctor with a special interest in sports medicine. 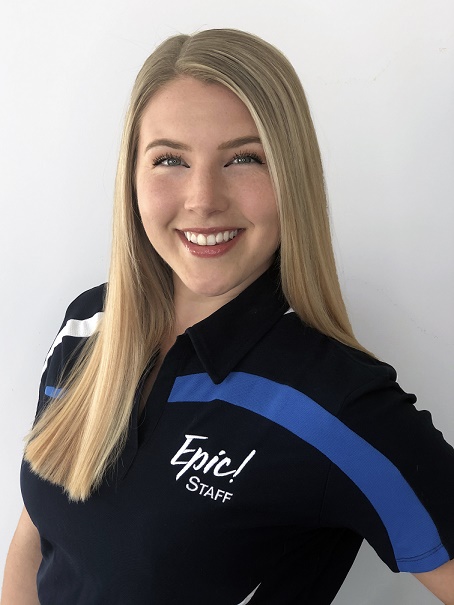 Director of Operations
Cassandra is an NCCP Competition 1 coach, and runs the day-to-day operations at EPIC. She has a background in management and graphic design, which she puts to good use at EPIC, ensuring a strong brand identity. Her athletic career has been incredibly diverse, from competitive figure skating, to soccer, to karate, plus varsity wrestling at the Provincial level in both high school and university. Beyond her passion for health & fitness, she most enjoys the psychological and philosophical aspects of sport, and loves helping athletes overcome difficult obstacles so that they can gain confidence in themselves. Cassandra also has a passion for musical theatre -- you might have seen her as Dorothy in the Capitol Theatre's production of The Wizard of Oz! 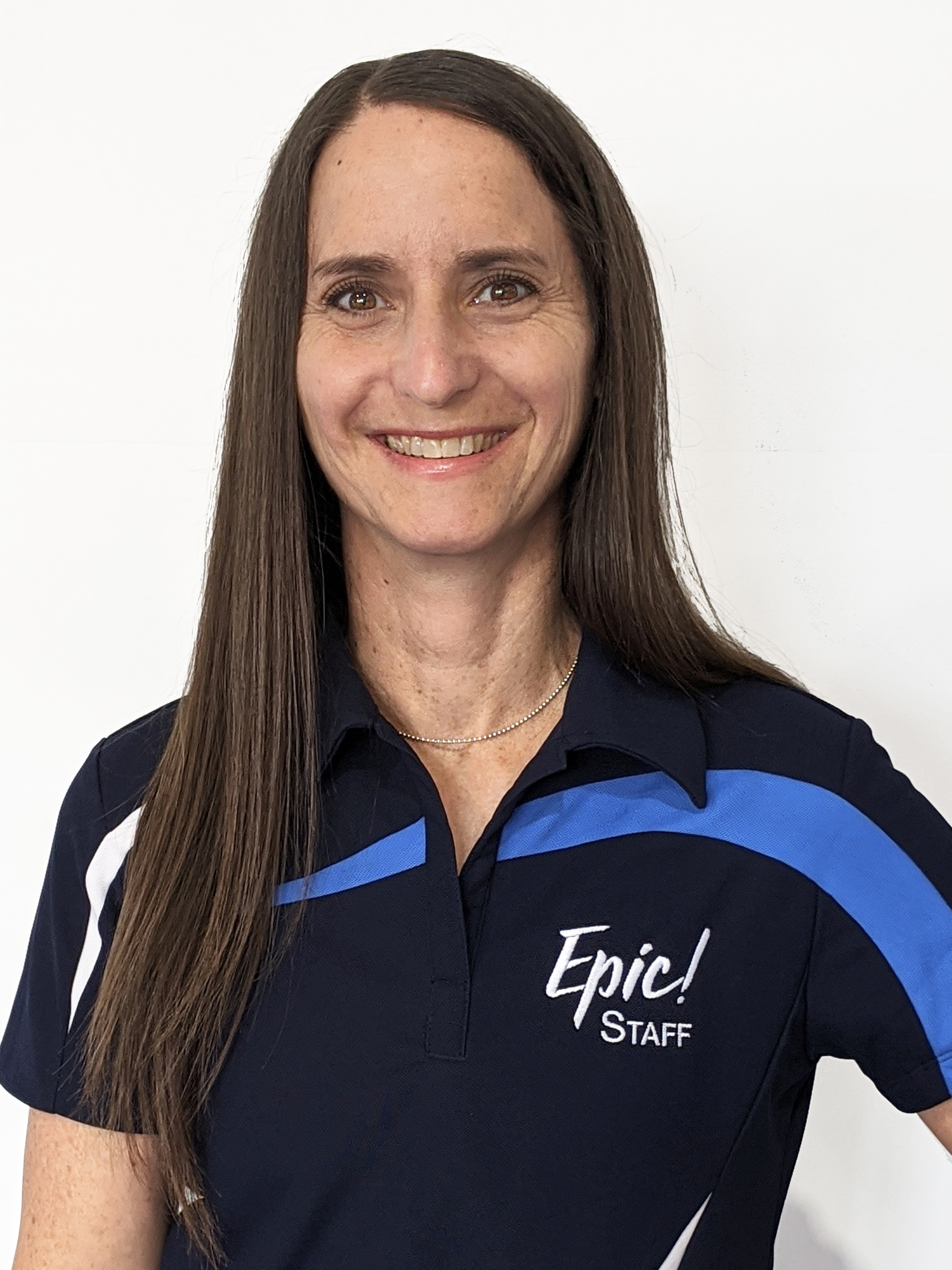 Dance Instructor
Stephanie attended Ryerson Theatre School for Dance, as well as the 3 year professional contemporary dance program at the School of the Toronto Dance Theatre. She has been a dance educator for over 24 years at various facilities, such as: Premiere Dance Cobourg, GoodLife Fitness, Bodilogix, Ontario Early Years Centres and many schools in Northumberland. She has led the dance program at Trinity College School for over a decade. Stephanie is a certified ADAPT educator in Tap and Jazz, and a certified fitness instructor with Canfit pro as well as Zumba. She is one of the founding members of Northumberland Contemporary Dance Collective. For Stephanie, her greatest reward in life, other than spending time with her 3 children, comes from sharing her passion for dance, whether it’s with her students or a captive audience. 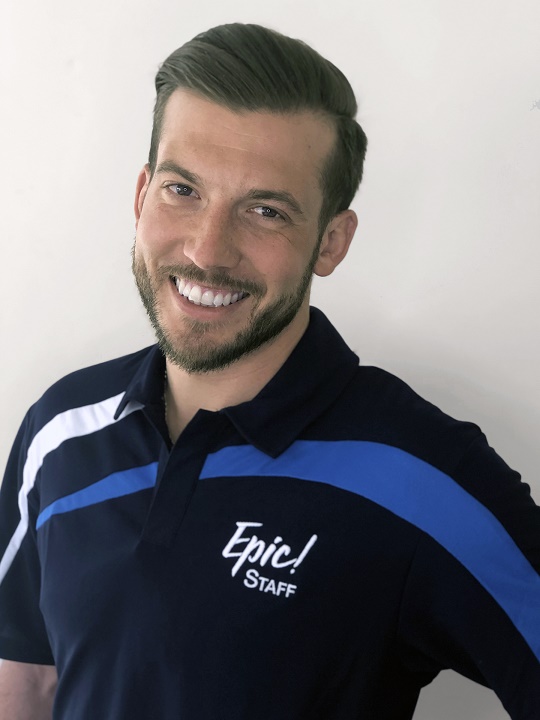 Gymnastics Coach
Malcolm is an NCCP Level 1/Foundations gymnastics coach. Although he came to gymnastics as an adult, he took to the sport instantly and excels at coaching. His passion is bars, and he has an incredible "giant"! Malcolm is the creator and innovator behind our hugely popular "Warrior" program, and spends much of his free time researching new techniques and drills for parkour, free running, and rock climbing. As a lifelong athlete, he has been involved in many sports, including the Junior National Dragon Boating Team, competing in Australia, and the UFC Fitness Competition, where he took first place in Men's Fitness. Malcolm has also been a team member of the Junior National Bridge team, competing in China and Thailand. He is passionate about nature, and is a Beekeeper and a Bonsai tree artist. 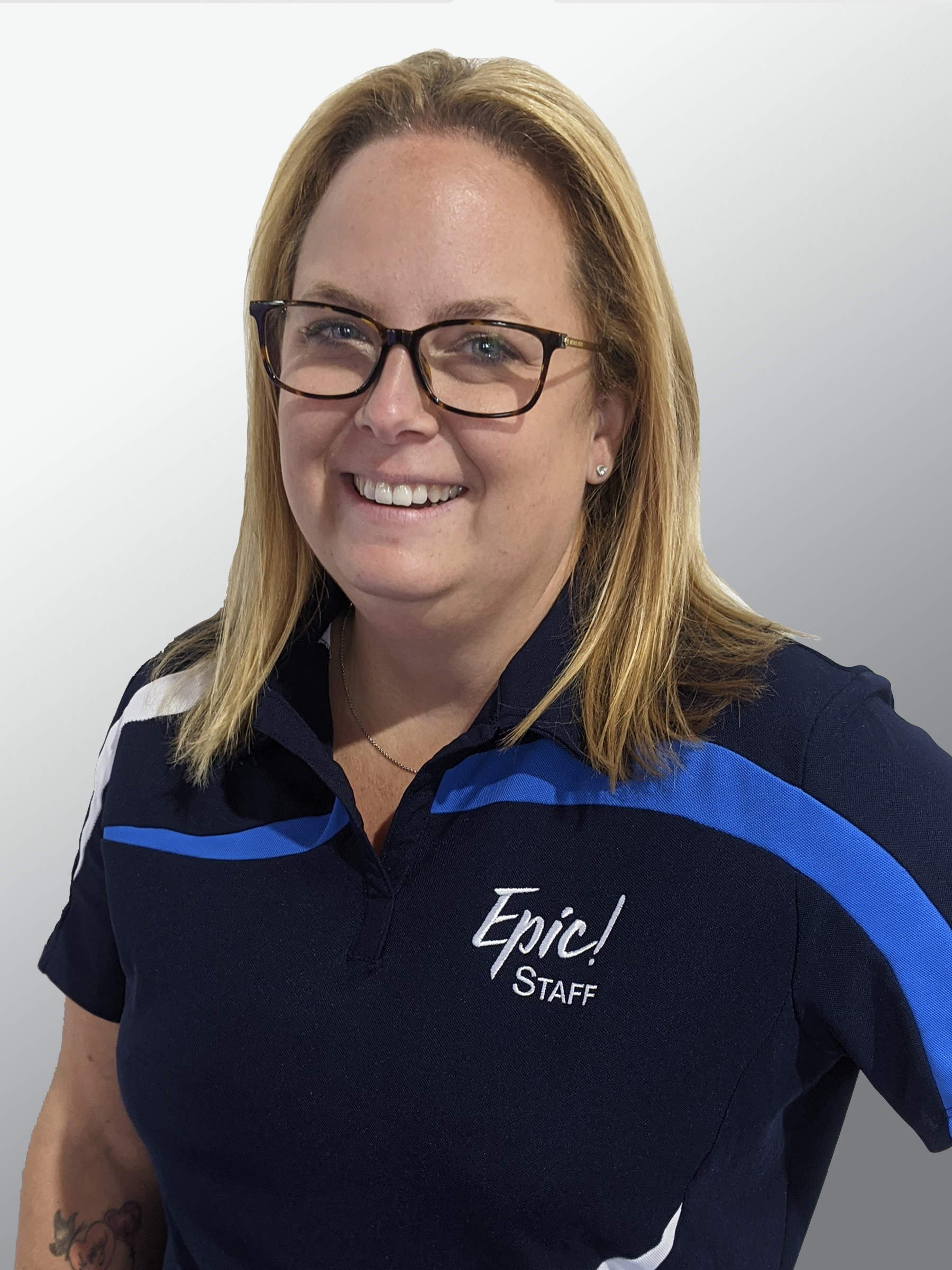 Gymnastics Coach
Danielle began coaching in order to spend more time with her daughter, who was a competitive gymnast. She loves working with younger competitive athletes to give them a strong foundation and bring out their full potential. She is a stickler for detail and ensures each athlete is bringing their all. Even though her daughter has now "retired" from gymnastics, Danielle loves being in the gym and has been coaching for 6 years! She is well known for her friendly and welcoming personality and big smile. Danielle has also worked at Ste. Anne's Spa for 19 years, doing Aesthetics. In her free time, she enjoys camping, baseball, and sewing. 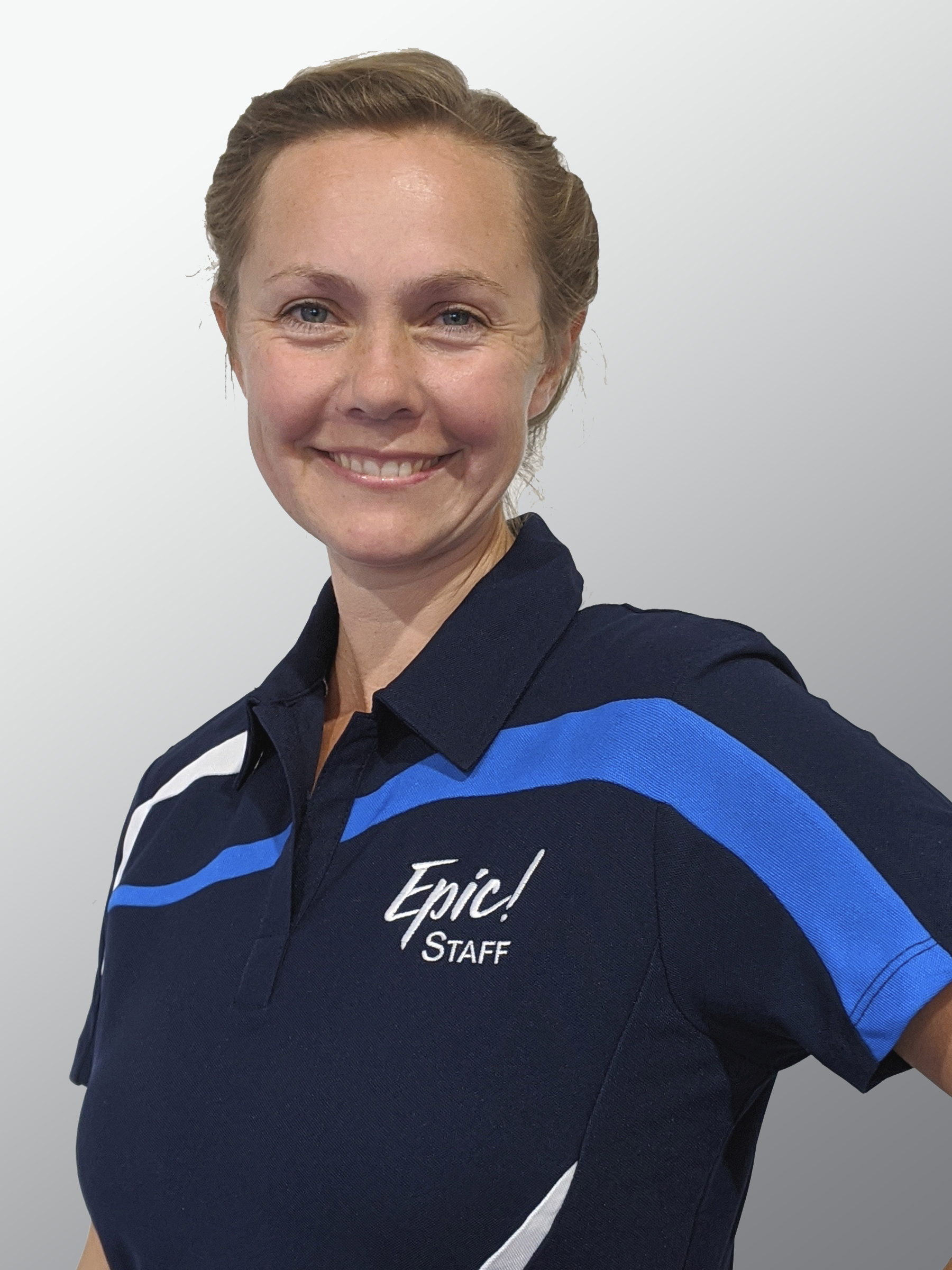 Dance Instructor
Katie grew up in Kansas studying all forms of dance and artistic expression at ArtisTree school for the arts. She later went on to train at the National Ballet School's full-time program in Toronto, the Burklyn Ballet Theatre of Vermont and graduated from the Virginia School of the Arts. She has taught classical ballet to all levels and ages for over twenty years in Kansas, Vermont and locally at Premiere Dance Cobourg. Katie loves sharing the artistic and technical side of dance with her students and connecting with her community as a founding member of the Northumberland Contemporary Dance Collective. Katie is also a visual artist and owner of Moon House Art. She and her husband homeschool their four children in Cobourg. 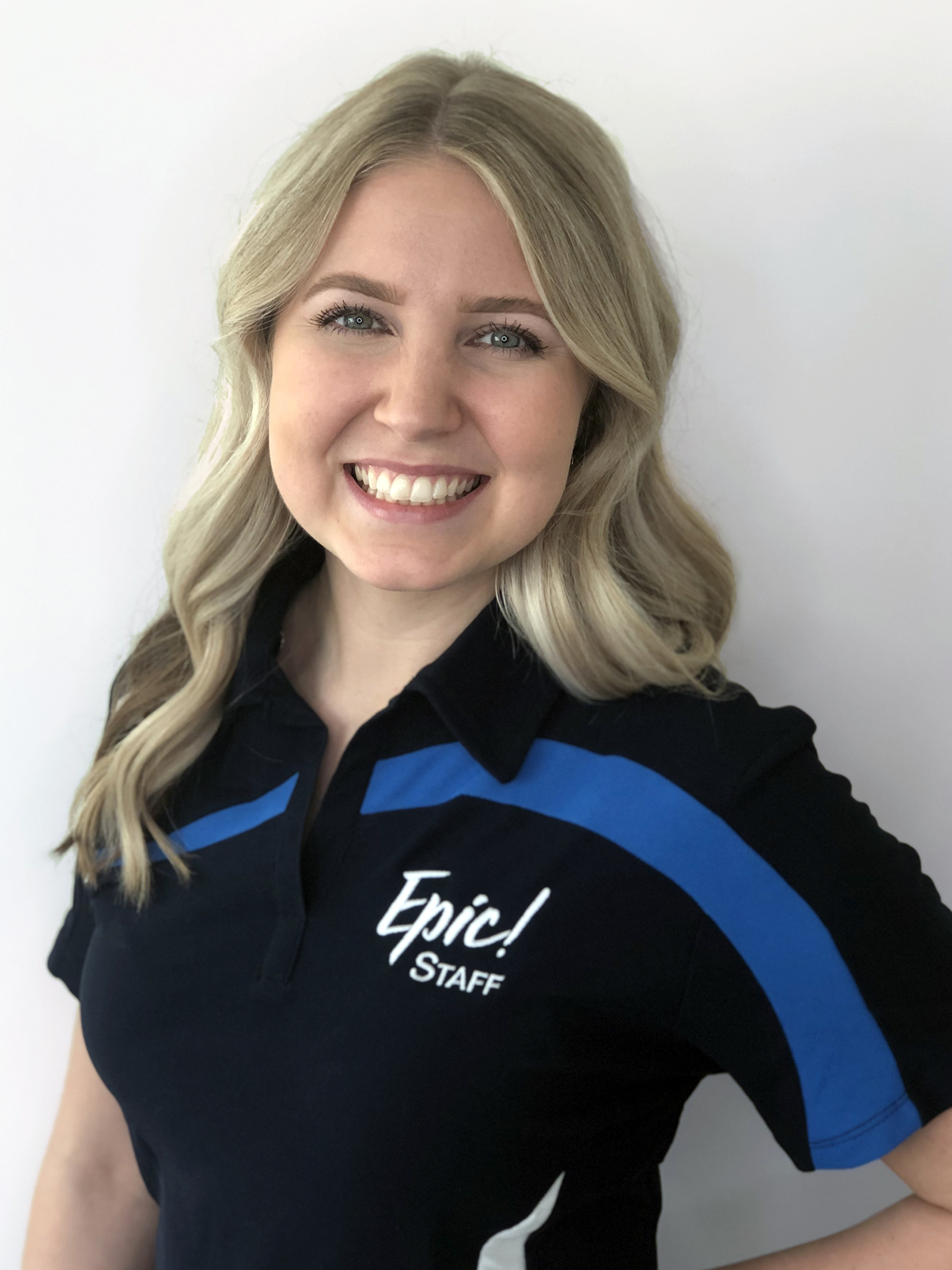 Gymnastics Coach
Carolyn is an NCCP Level 2 gymnastics coach and former Provincial athlete. She has been in the gymnastics field for 11 years, coaching many athletes to success at Provincial Championships. Well known in the gymnastics community for her firm-but-friendly coaching style, athletes love her bubbly personality and big smile. Carolyn is highly driven and ambitious -- by the age of 23, she had purchased a property and custom-built her own home with her husband. Carolyn is also a full-time hair stylist in Cobourg. She has two cats and is expecting her first child, due in June! 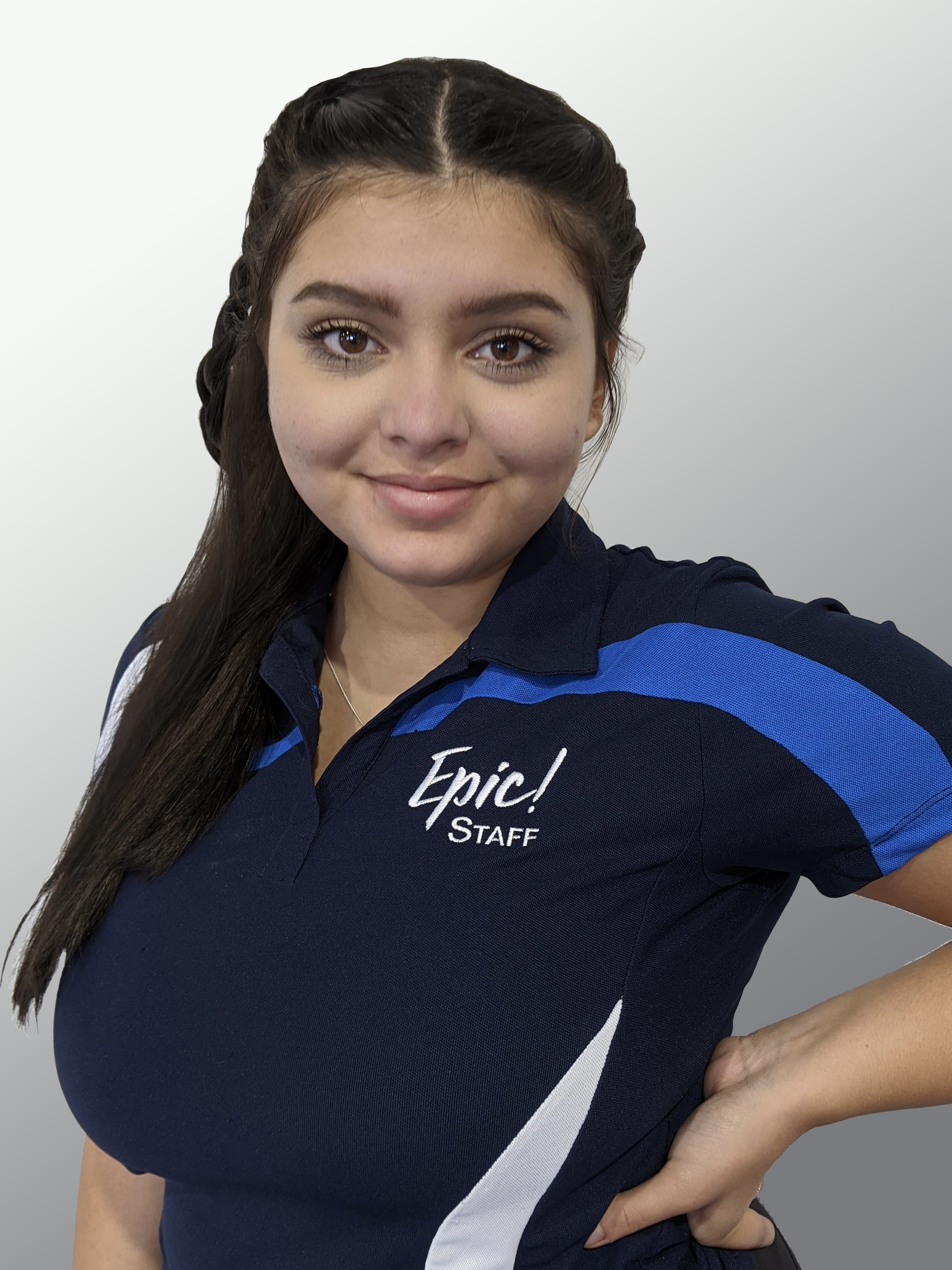 Gymnastics Coach
Aidhana is a Grade 11 student at CCI in Cobourg. She has been in the sport of gymnastics for 8 years, beginning as a Recreational athlete, then a Demo athlete, and finally a Competitive athlete. She loves coaching because she loves working with kids. She is also an active theatre performer, appearing in many productions with VOS. Her hobbies include singing, playing music, baking, and activism. 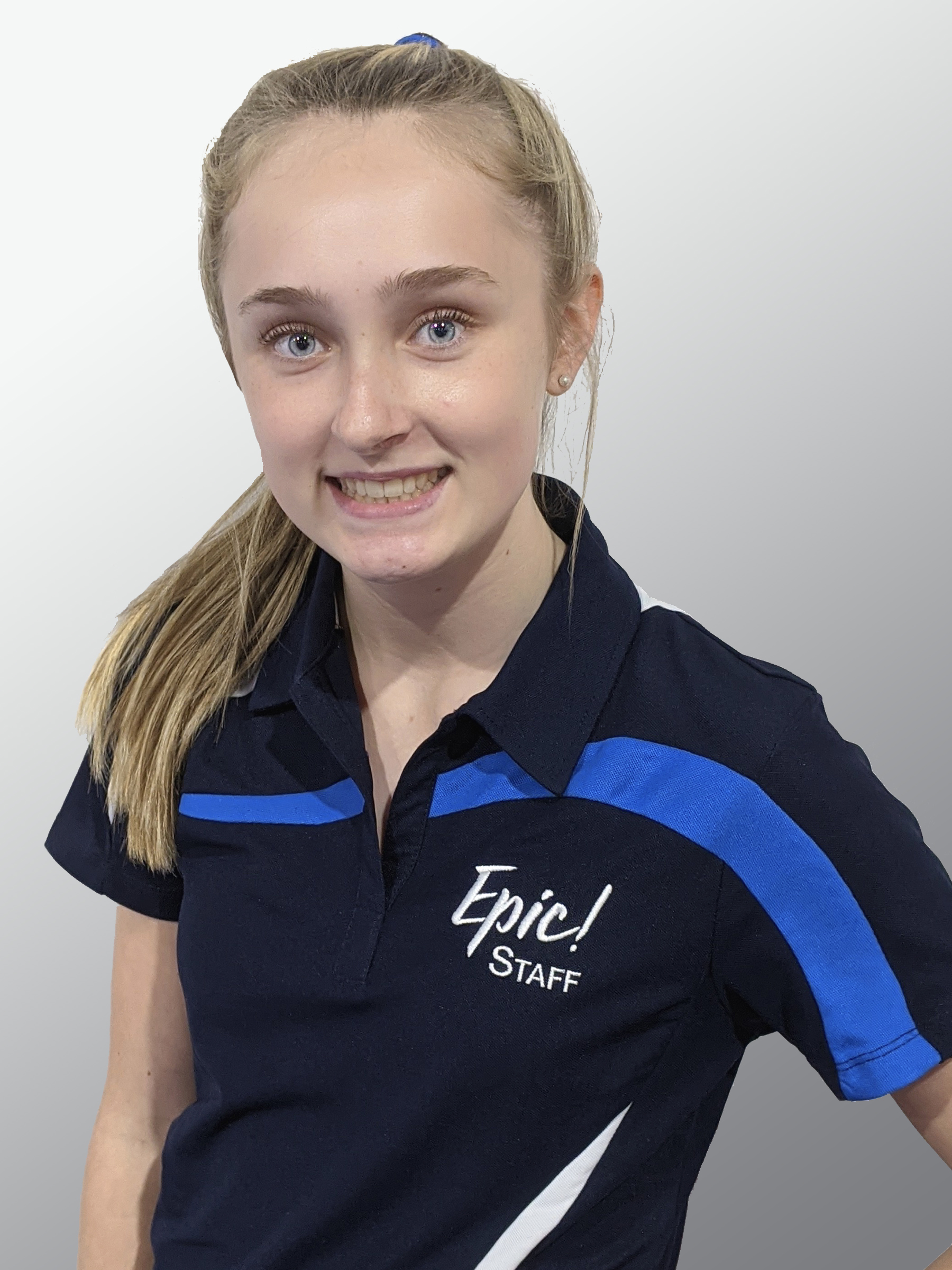 Gymnastics Coach
Madi is a Grade 12 student at St. Mary's CSS in Cobourg. She is a former competitive gymnast, having competed at the Provincial level and making it as far as Ontario Championships! Her favourite events in the gym are floor and tumbl trak because she loves to tumble. Madi began coaching gymnastics because she enjoys the sport and loves helping athletes reach goals that they have set for themselves. When Madi isn't in the gym, she is usually hanging out with friends or learning the newest TikTok dance. 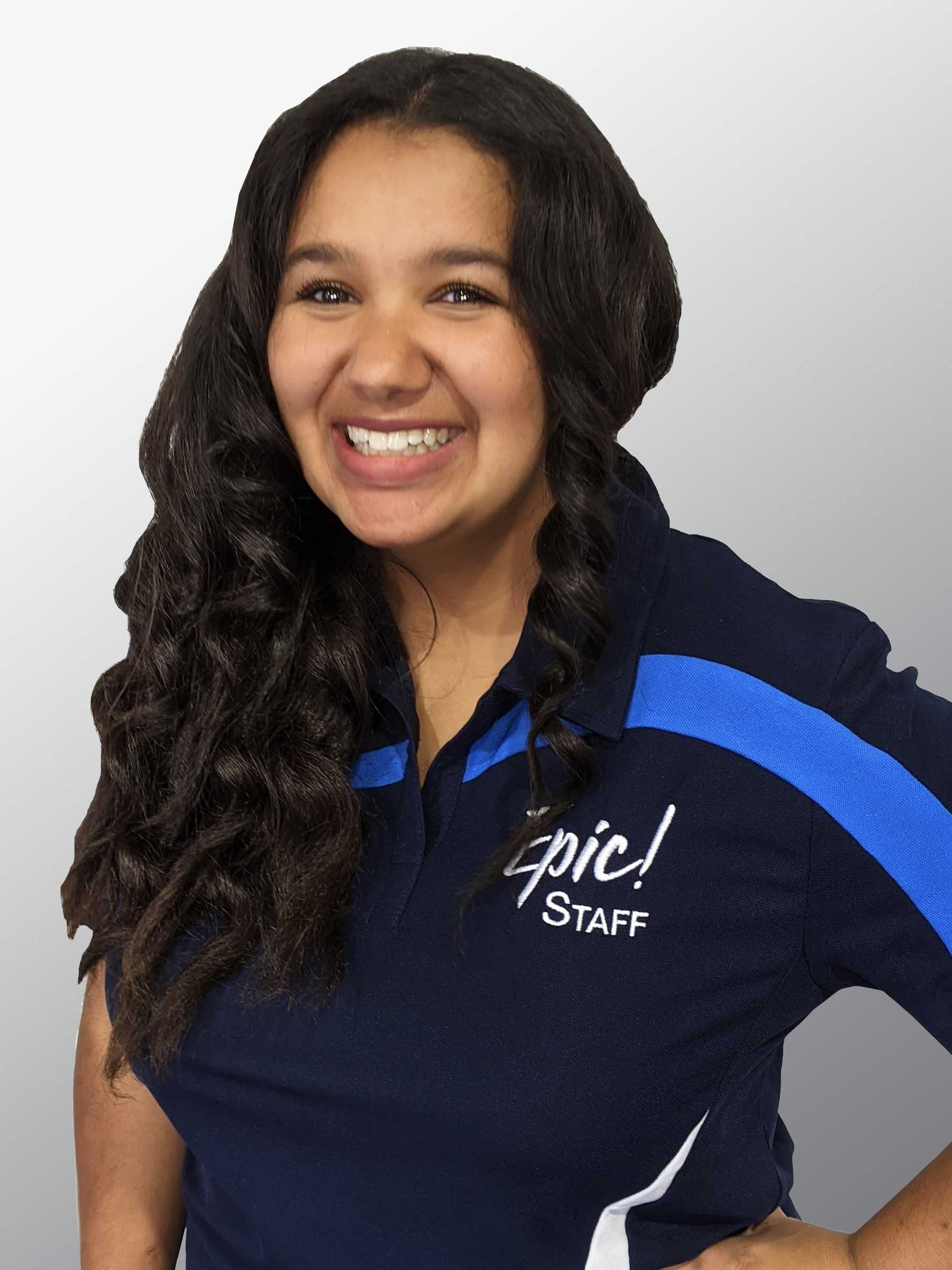 Gymnastics Coach
Katrina is a Grade 12 student at St. Mary's in Cobourg. She is a hard worker and helps with many aspects of the gym. She participated in Recreational gymnastics for many years, and currently participates in our Teen/Adult class, where she has mastered her back tuck! She enjoys gymnastics because it is fun, and she likes to challenge herself to achieve new skills. Outside of gymnastics, she loves doing Zumba, Yoga, Rugby and Soccer. 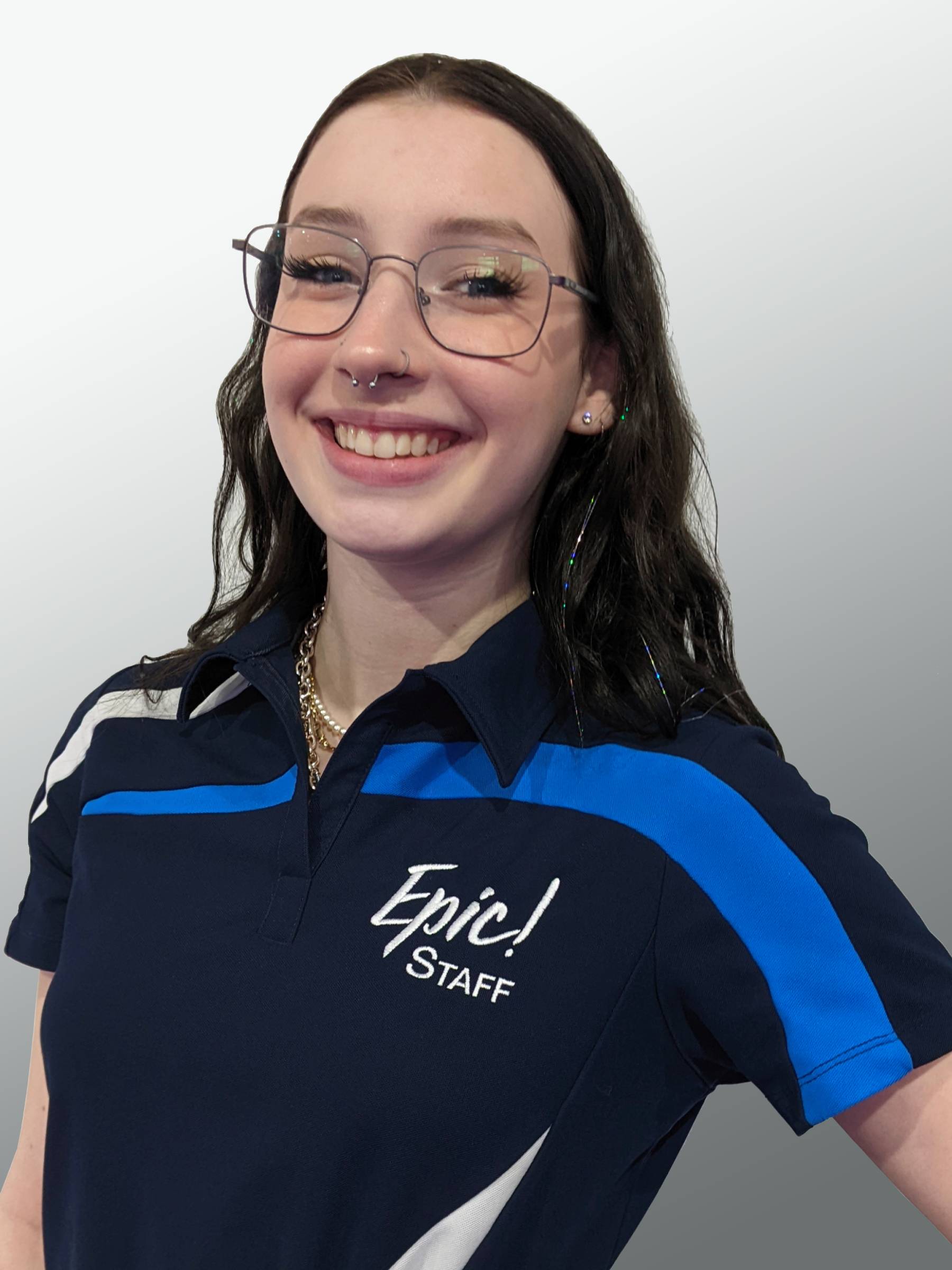 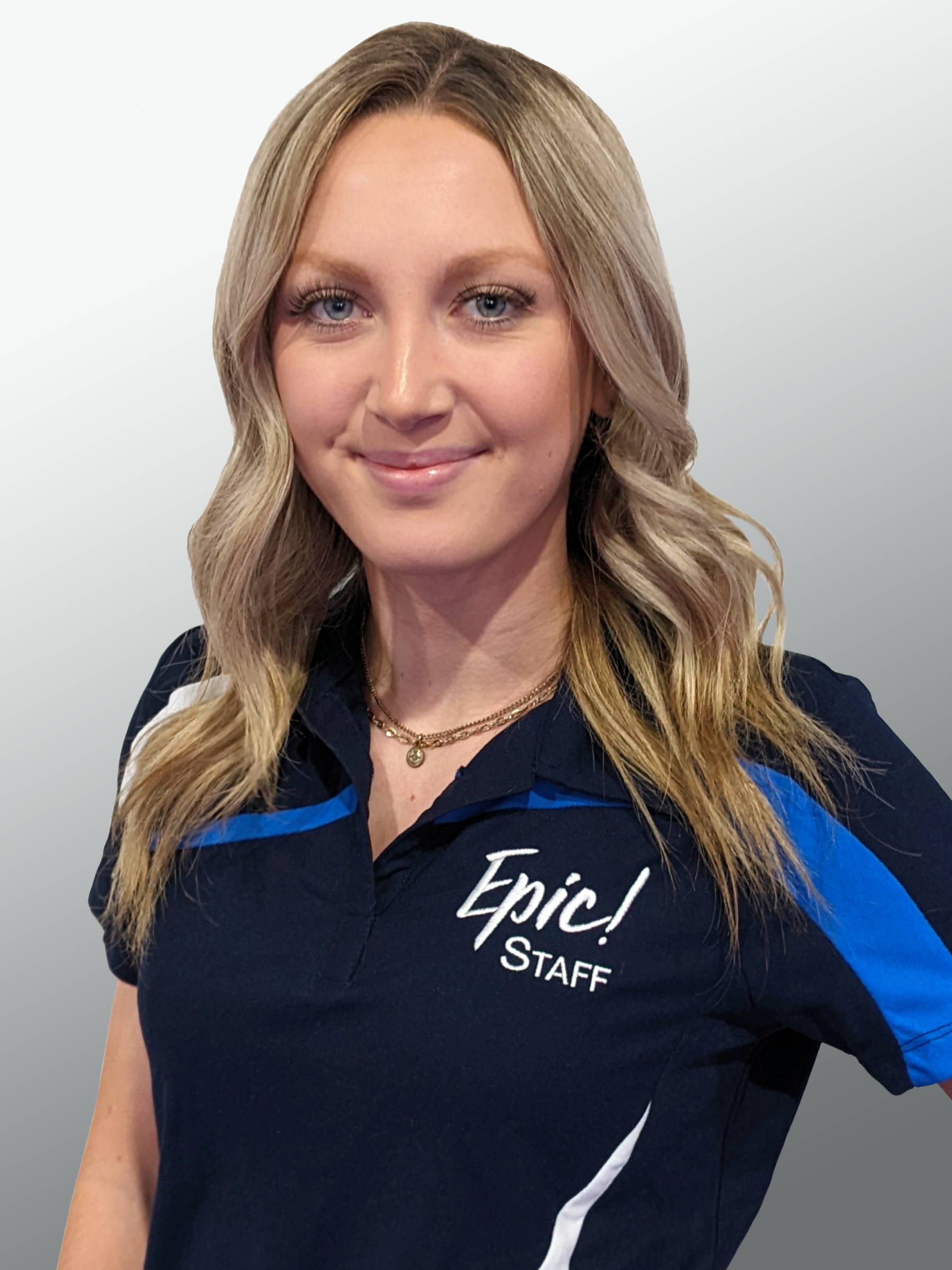 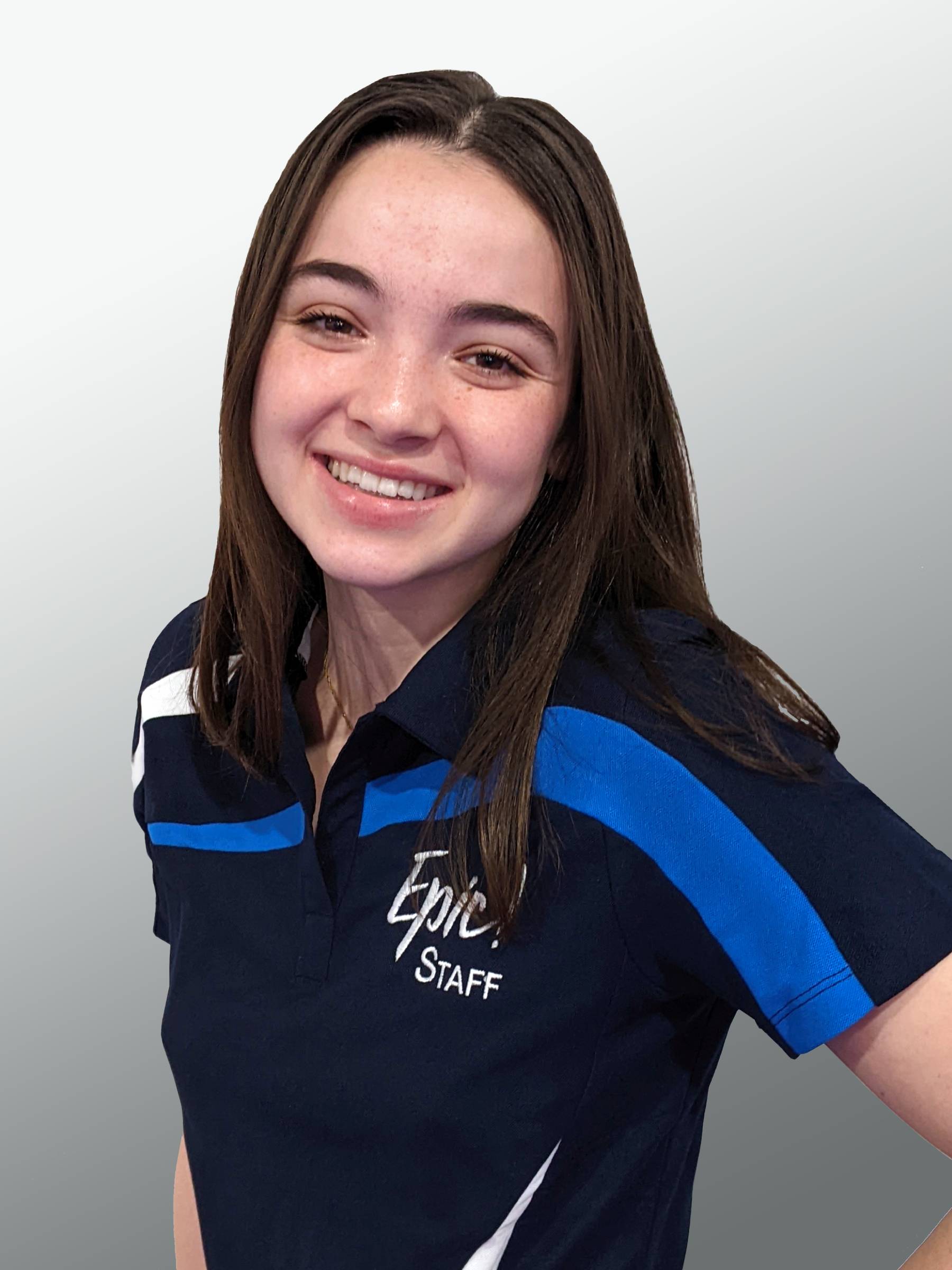